The River Tay is Scotland's largest salmon river at 117 miles in length and its catchment covers a massive 2000 square miles of central & highland Scotland. The Tay start its humble headwater course way up on the slopes of Ben Lui in the West before eventually meeting the north sea at Dundee on the East coast of Scotland. The Tay's main tributary rivers Tummel, Dochart, Lyon, Lochay, Earn, Isla & Almond are as big as many other independent Scottish salmon rivers. The Tay is without doubt the King of Scottish salmon rivers and has an enviable 'big fish' reputation.

Several years ago the River Tay management tightened up their salmon stock conservation policy to increase salmon stock levels. The recent good runs of salmon that the Tay has been enjoying through 'Catch & Release' have without doubt been due to this sensible & globally accepted conservation measure. In addition to this salmon fishing recommendation the Scottish Goverrnment made it illegal to kill a wild salmon up to the 1st of April each year. These basic stock management policies will stand the River Tay's salmon stocks in good stead for future decades.

The Tay is Scotland's most accessible salmon fishing river due to its huge size and consistent loch fed water levels. Even through the lowest Summer water levels salmon always have enough water to run the Tay. In addition to this even when there's too much water following significant & prolonged heavy rainfall the Tay is often still fishable due to the huge lochs that act as settling tanks keeping flood water colour sedimentation levels to a minimum. The famous River Tay is easy to reach from the major Scottish hubs of Glasgow & Edinburgh which are both approximately 90 minutes away by car.

A huge salmon of 64lbs was caught in the 'Boat Pool' on the Tay's famous Glendelvine Beat in 1922 by lady salmon fisher Georgina Ballantine which is still the British rod caught record salmon. In recent salmon fishing seasons salmon of 40lbs have been landed including one which was recently caught during October which was 45lbs in weight. Having worked on the Tay for most of my life I have no doubt that salmon of 50lbs and bigger still enter the River Tay system especially during late Autumn as often dead 'kelts' (salmon that have spawned) are found in early Spring that are in this monster River Tay salmon category.

During the Spring & Summer months many salmon are landed in the 20lbs & ocassional 30lbs class and I'm sure it is only a matter of time before a Spring or Summer salmon of 40lbs is caught. There is a traditional run of heavyweight Spring salmon that heads for Loch Tay & the River Tummel near Pitlochry during the earlier months of the Tay's salmon fishing season. Salmon of the 40lbs class have been often seen in the Pitlochry dam's fish ladder viewing chamber on the River Tummel which is a prolific Spring River Tay tributary river. On average the River Tay produces between 8,000 & 10,000 rod caught salmon each season.

The River Tay salmon fishing season opens on the 15th of January each year and a fresh run salmon are present at this time and thoughout February. Once the month of March arrives things always change dramatically as many more salmon appear in greater numbers as they migrate to Loch Tay & rivers Isla and Tummel. March usually brings a little bit more warmth which encourage fresh Spring salmon to push up river and the prolific river Tummel & Isla tributaries can be very good from March onwards. The later Spring & Summer months bring more runs of salmon daily into the Tay system. From August onwards large numbers of Autumn salmon build up in the lower Tay and big catches of salmon are often recorded on the lower Tay in Autumn. The middle and upper River Tay salmon fishing beats can be very productive too in the Autumn months and much is to do with water levels & temperatures like any any other seasons of the salmon fishing season.

The popular & traditional River Tay salmon fishing methods are fly fishing, spinning & traditional boat fishing known as harling (which is a form of trolling). The boat or riverbank approach with any of the above methods is normal and effective.

The best fly fishing equipment for the River Tay is a salmon fly rod between 14-16ft ft. These double handed salmon fly rods paired with a floating line and a sink tip will cover most seasonal water conditions. In low Summer water this full floating line with sink tip is still perfect for the Tay's deep pools. In the early Spring a full intermediate line or a longer heavier sink tip can be added to a floating line if conditions dictate a deeper fly swim approach.

Popular Spring salmon flies are the deadly 'Dee Monkey' and 'Copperass' tube fly patterns tied on 1 inch copper tube bodies work well in the early cold water months of January, February & March. The 'Copperass' tied on a double size 9 is the perfect 'proven' pattern from April though to the end of May. Through the Summer months of June & July I can't see past the traditional 'Silver Stoat' or 'Blue Charm' patterns which have always stood the test of time when it comes to attracting salmon during low, warm clear water periods of the year. As Autumn approaches traditionally salmon flies with orange or red in them do well and for August and the first half of September these colours are a safe bet. The pattern I personally use is called the 'Jock's Shrimp' which can be viewed on the River Tay salmon fishing beat presentation pages. After mid September I'll move on to a one inch copper tube version of this highly successful River Tay Autumn salmon fly pattern.

Chest waders will studded boots are very important on the River Tay to get a good grip of the riverbank and the riverbed stones. Polaroid sunglasses are an important piece of kit too which help considerably with wading and eye protection. A wading stick is also worthwhile for those who aren't confident when wading along with a mandatory life jacket just in case you should lose your footing at any point throughout the salmon fishing day.

'Fish Of The Month' Prize 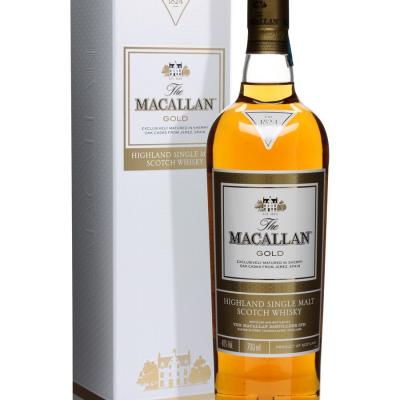 Throughout each month of the Scottish salmon fishing season one bottle of malt whisky will be presented to a salmon fishing client of this booking platform who provides the best quality photograph of a specimen salmon that they caught on any of this website's participating salmon beats.

Many popular & picturesque Scottish towns are situated in the River Tay valley such as Aberfeldy, Pitlochry, Dunkeld, & Stanley and the city of Perth is located where the River Tay's fresh water meets the north sea. There are many quality hotels and B&B's in the River Tay valley and the majority of which are located within easy travelling distance to the best salmon fishing locations. All of the River Tay Valley hotels provide evening meals, packed lunches and a have a great selection of Scotland's finest malt whiskies for an evening dram to wind down the fishing day with.

From a personal point of view I caught my first salmon in 1970 at the age of 5 years on this majestic Scottish salmon river so my own personal relationship with the Tay is very special and has spanned decades as a professional ghillie providing quality introductions to River Tay salmon fishing for literally thousands of salmon fishers. Once you've fished the mighty River Tay and breathed in its seasonal magnificence don't be surprised if she lures you back annually such is her outstanding natural beauty and excellent salmon fishing. 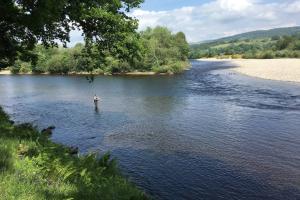 The Dunkeld Salmon Fishing Area Of The River Tay Is Which Is Located 16 Miles Above The Tidal Water At Perth. 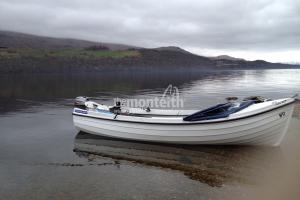 Loch Tay Is A Famous Scottish Salmon Fishing Venue Which Is Renowned For Its Productive Boating Approach Through Traditional Tactical Shore Line Trolling. 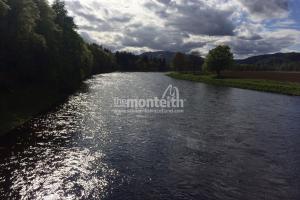 When We Talk About Famous Scottish Salmon Beats Then Everyone Associated With Scottish Salmon Fishing Has Certainly Heard Of Georgina Ballantine And Glendelvine Water On The River Tay.